MISSING: An Interactive Thriller is an unusual game. Developed by a Canadian indie team by the name of Zandel Media; MISSING is a throwback to the FMV games of the early-to-mid nineties (albeit one with access to modern-day technology). It is an episodic game, the first episode of which is approximately 45 minutes in length. It’s an odd beast to say the least.

The idea behind MISSING (and indeed all FMV games) is immediately appealing; why bother with complex computer-generated graphics when you can record video footage and use it in your game? After all, what looks more realistic than real life? Looking back at nineties-era FMV games, the problems were clear: poor quality footage on even poorer quality green screens that would be considered unacceptable by today’s standards, couple that with terrible acting and the fact that the very nature of the material massively limits the ways in which a game-dev could potentially use it and you’ve got the makings for some really terrible games (Night Trap springs to mind). But with the addition of today’s technology (I’m looking at you HD video) things really start to take shape. The footage that makes up almost the entirety of MISSING is of a high visual quality and it’s immediately clear that whoever was operating the camera, had some decent experience in doing so. The acting (while by no means perfect) is of a far better quality than I initially expected as well. MISSING’s production values are more than respectable in several areas. 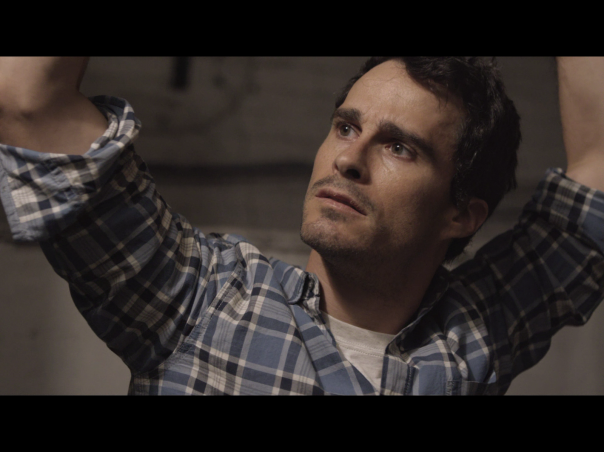 With its quality cutscenes MISSING is a far cry from the FMV games of the early 90s.

It’s a real shame that the other aspects of the game don’t quite measure up.

MISSING starts with our main character, (David Newcastle) waking up in a strange room; he’s chained up and scrawled across a nearby door are the words “PLAY WITH ME”. It’s clear then, that we’re in a scenario akin to something out of a Saw movie. Unfortunately, this aspect of the game is never elaborated upon; it never becomes sinister or even particularly interesting in any way and it does nothing that might actually hook or engross the player. The most interesting thing our secretive captor ever does is to occasionally leave the protagonist’s family photos lying around. A dull villain to say the least. 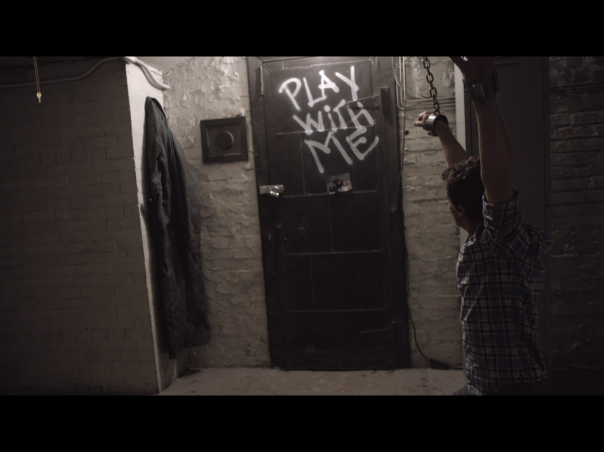 Other than the finale, the main character is never in any real danger; there’s never any threat or reason to worry for our hero, each chapter just brings the protagonist to another locked room with another arbitrary puzzle which makes the overall experience feel a bit bland. A thriller (which judging by the title this game is obviously meant to be) is supposed to be just that: thrilling. The only shred of the game that has any real sense of atmosphere is the second chapter which sees the player taking on the role of a police detective investigating the disappearance of David Newcastle. Examining the victim’s abandoned car in the dead of night; this scene actually gives the game a modicum of character, it lends a slightly darker tone to the whole experience. Unfortunately this chapter is very brief and ends without ever really accomplishing anything.
Similar things can be said about the characters. Nothing in MISSING ever causes the player to become even remotely invested in any of the characters; the protagonist is alone, so barely speaks and neither of the playable characters has any backstory; making it difficult to become emotionally attached to either character as they’re almost entirely lacking personality traits. This gives the player no reason to care.
In a short episodic game the entire goal should be to hook the player, thereby convincing them to buy more episodes but in MISSING this goal seems to have been neglected entirely. The game has no compelling characters, a distinct lack of atmosphere and little in the way of actual story. With a game as short as this (45 minutes) making a big impact on the player is imperative. Considering the quality of the game’s assets, the whole thing seems like a massive missed opportunity.

In-between cutscenes the game is comprised of basic point-and-click gameplay that sees the player completing basic puzzles to advance the game. Every chapter (with the exception of chapter 2) involves solving puzzles to escape a locked room to gain access to another locked room with more puzzles, which makes the whole thing feel like an old “escape the room” flash game. Ordinarily this wouldn’t be a much of a problem, but MISSING makes it into one by sheer virtue of the fact that so many of its puzzles are so incredibly derivative. Multiple sliding tile puzzles, a word search and on 2 separate occasions the game just gave me diagrams of the exact solution for some of the puzzles so I could copy them. It’s hardly a puzzle when the only way to solve it is to look at the answer; the game is literally saying “Look! These 2 doors have ornate, puzzle-based locks! It’s a shame that there’s no way to solve these using logic. Oh well, here’s the answer. Have fun!”
The other aspect of gameplay comes in the form of quick time events (QTEs). For the most part they serve the purpose of making the protagonist dodge away from multiple exploding bombs during the game’s finale (although one particular QTE did involve attempting to successfully drink coffee). There was also a QTE that allowed me to choose between left and right paths in my bid to avoid explosions. While initially playing this game I found the QTEs to be fairly unobnoxious, they make some of the cutscenes marginally more exciting and seemed like a decent fit for an FMV game. On my second playthrough however, I began to see the problems. None of the QTEs has any impact on the game whatsoever; you can literally ignore them all and nothing is affected, sure you get a slightly different video clip played after successfully completing one but overall the whole thing is futile. The aforementioned binary choice is the same as well, pick left and the protagonist runs to the left of the bookshelves where there are explosives to dodge or pick right and the protagonist runs to the right of the bookshelves where there’s (you guessed it) more explosives.

While reviewing MISSING I also played the Android version to see if there were any notable differences. Obviously the Android version’s touch controls do make the QTEs feel more intuitive (although as I’ve already established, what’s the point?), but the main difference between the 2 versions is that the Android version has removed several of the puzzles; one of the sliding tile puzzles is gone, some of the hidden items are removed and a very basic puzzle that involved opening drawers was notably absent. But it’s difficult to judge whether or not this change is good or bad. On one hand it does mean that the number of arbitrary puzzles is considerably lessened, but at the same time you’re getting less game for your money. 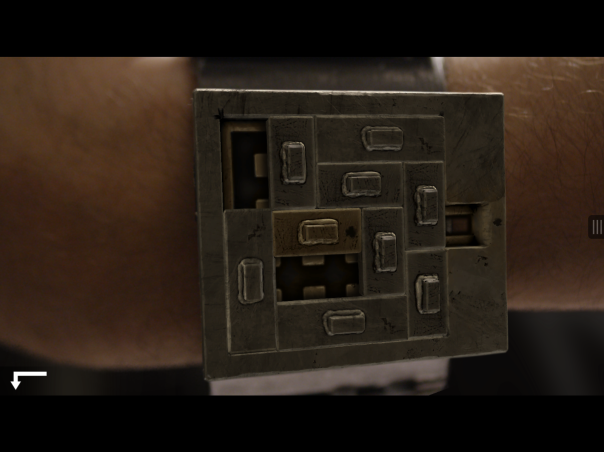 Ever seen one of these before? Well MISSING contains this puzzle. Twice.

MISSING: An Interactive Thriller makes a good first impression with high-quality visuals, decent camera work and surprisingly good acting but the game is subsequently let down by poor tone, a lack of atmosphere, flat characters, tired puzzles and pointless QTEs. The game has good overall presentation but little substance where it really counts. Considering its low price and smartphone availability, I can see this game being a relatively enjoyable experience for more casual gamers, however I feel that any more seasoned gamers will find MISSING to be severely lacking depth and filled with overused puzzles that they’ve likely seen before. With nothing to grab the player’s interest, it’s difficult to imagine the second episode being particularly successful. At some point this game may have had some potential but all of the trite puzzles that have been inserted between the cutscenes have led to MISSING becoming the stale, hackneyed game that we see today.

MISSING: An Interactive Thriller is

MISSING: An Interactive Thriller is available for £2.79 on Steam or for £1.99 on the Google Play Store.