Monster Hunter’s main premise is all about hunting massive beasts. From the outset the game involves watching monsters, learning about their attacks and behaviours, and determining the best way to take them down with the weapons and items that are at your disposal. The game’s combat is a very precise experience with tight controls and many things to learn about each individual monster. The game’s weapon types are incredibly varied, with no 2 being alike; each weapon has various pros and cons with some of them taking considerable effort to master.
Monster Hunter is an unusual game, in that the player’s stats are determined entirely by equipment. There are no experience points, no levels, just whatever equipment you can craft.

Monster Hunter is a game about learning. Learning when each monster is open to attack, learning the ins and outs of your chosen weapon, learning which items are effective in which situations and everything else in-between. From learning how to craft armour to learning which food you should eat before a hunt; it can be a lot to take on board, but if you’re willing to take the time to learn Monster Hunter’s intricacies then it can be a massively rewarding experience.

Monster Hunter 4 Ultimate has the same tried and tested gameplay that made the series popular in the first place, but it has also made numerous additions to the formula that keep the gameplay fresh and more fun than ever before. Some of Monster Hunter 4’s new features include:

– Climbing and Mounting Monsters
Along with a new Monster Hunter game comes a new gameplay mechanic. Gone are the frustrating underwater battles of Monster Hunter 3 and instead we are introduced to climbing.

Several of the game’s monsters are capable of climbing on to walls and ceilings with some of them even attacking from there. It’s only fair then, that the players follow suit. All of the game’s maps now contain climable walls and ledges which can be jumped from; changing the game quite significantly.
Players can climb walls and cling to icicles and stalactites, all in the name of chasing down massive creatures. With the addition of climbing also comes the ability to jump from high places (walls, ceilings, cliffs) this gives players the opportunity to perform aerial attacks, which give the player a chance to mount the target monster.

While mounting a monster the hunter uses their carving knife to repeatedly stab the monster’s back while attempting not to fall off. This sequence takes place as a minigame; the player can repeatedly tap the X-button to stab the monster or hold the R-button to cling to the monster’s back as it tries to throw you off. If the player successfully fills the blue bar by stabbing the monster then the monster falls to the ground, leaving it susceptible to follow-up attacks. If the player stabs at the wrong time however, the wyvern head moves up the gauge with the hunter being thrown off of the monster’s back if the wyvern head overtakes the blue bar.
This new mechanic is simple but adds a lot to strategy; as a player you’re always looking for openings to perform aerial attacks so you can land lots of bonus damage on a downed monster, and in multiplayer mounting a monster gives your teammates some much needed time to heal up and sharpen their weapons while they wait for you to bring down the monster.

– New Weapons
The game introduces 2 new weapon-types in the form of the insect glaive and the charge blade, bring the overall total to 14.

The insect glaive is a spear-like weapon combined with an insect companion called a kinsect. The glaive itself is a very mobile weapon which gives the player the ability to pole-vault: allowing the player to dodge attacks and manoeuvre around enemy monsters as well as providing the player with many more opportunities to hit with aerial attacks and potentially mount the monster.
The other half of the equation is the kinsect. The kinsect is used to drain different “essences” from monsters. Each essence comes from a different part of the monster and gives a stat boost to the player when the kinsect returns. Essences can boost: speed, attack, defence and health and can even provide hunters with the earplugs effect. The glaive can also shoot “pheromone bullets” which help to guide the kinsect to specific parts of the monster’s body so that the Hunter can obtain the desired essence more easily. 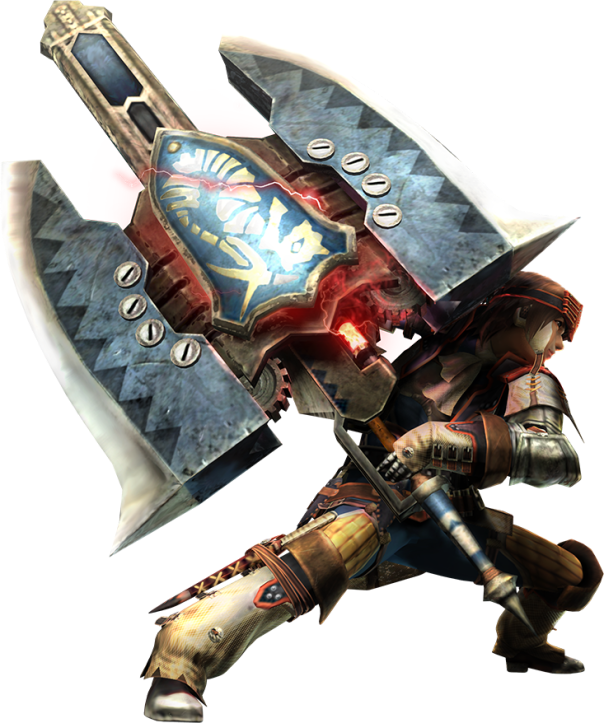 While in sword & shield mode, the charge blade allows the player to attack more quickly and make use of the shield’s defensive properties.
While in axe mode, the player’s attacks gain great power and range at the cost of some of the weapon’s attack speed.
One of the main uses of sword & shield mode is to charge and store energy which can be used later to enhance the axe with (literally) explosive attacks.

Overall the insect glaive looks to be the more simple weapon of the two, while the charge blade is decidedly more complex with a much larger number of attacks at its disposal.

– Expeditions
Monster Hunter 4 is the first game in the series to introduce expeditions. Expeditions are randomly generated hunts that take place in the Everwood, an ever changing forest made up of pre-built, randomly selected areas with randomly selected monsters that can drop in or out of the expedition at any time.
As well as allowing you to fight previously defeated monsters in a new setting (often with multiple monsters in play at once), expeditions also give the player the chance to find relics. Relics are pieces of equipment (weapons and armour) with randomly generated stats and attributes that can often be superior to their main game counterparts; while relics do need to be polished before use, it’s a small price to pay for some of the boosted stats that the equipment can offer.

Overall expeditions are fun, (mostly) optional sidequests that give you a chance to get items and equipment that aren’t available anywhere else in the game. Expeditions help to ensure that you’ll always have something to do and are a nice alternative to the main game’s quests.

– Online Play
Monster Hunter 4 is the first game in the series to feature true online multiplayer. Connecting and finding a group to join via the 3DS WiFi couldn’t be easier; just click the button marked “Online Multiplayer” and you’re off. At last hunters from across the globe can team up to take on tougher missions and bigger threats. The whole system seems to work well with the online component taking place in the game’s “guild hall” a hub area where players can select missions, change item sets and eat before the hunt.

Graphically, the game looks good with its 3D-enabled cutscenes being a particular highlight. Each of the monsters is very detailed and it’s obvious that a lot of care has gone into making them appear realistic with the developers adding aspects from actual wildlife to give an interesting mix between mythical creatures and the animal kingdom.
The game’s environments provide some interesting places to stalk your massive prey; the game features an array of beautiful vistas including plains, deserts, swamps, mountains, volcanoes and tundra all with different effects on both monsters and hunters.

The game’s user-interface is much improved as well. All of the menus look cleaner and the game’s maps have been improved. Zooming in on an area of the map now provides the player with a higher resolution image of the selected area; a big improvement compared to MH3U which took the same image and enlarged it which led to a map made of blurry, pixelated images.

Monster Hunter 4 is the first game in the franchise to actually feature a story. While it’s hardly a mind-blowing piece of fiction, it is a nice addition to the game. The story involves the main character joining a travelling nomadic caravan (which allows the player to travel between several different villages) and seeking out the truth behind a mysterious object known only as “the article”. The story is enough to keep the player interested and also gives some background information about why you’re hunting specific monsters.

This latest entry in the series is a much more beginner-friendly experience than its predecessor. The game actually features several basic tutorials to help new players on their way through the early stages of the game, as well as explanations of how to use the game’s various weapons through “Weapon Training” quests; which is important as Monster Hunter essentially becomes a whole new game when you change to a different weapon-type. There’s still a lot to learn here, but it’s no exaggeration to call this game the best starting point for newcomers to the series yet.

In conclusion, Monster Hunter 4 Ultimate is a fun and addictive action RPG with a ton of depth. All of the game’s new features are substantial and welcome additions to an already critically-acclaimed series.
Newcomers can look forward to exciting hunts with the kind of battles that they’ve never seen before in a video game, along with lots of very rewarding gameplay; while series veterans can expect everything that they’ve come to love about the Monster Hunter series plus a slew of exciting, new features.